However, since the switch to Wayland, this application menu is not accessible anymore, as can be seen in the following screenshot of the same application running on Tails 5.8: 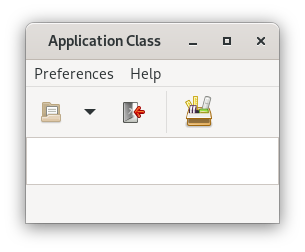 In order to reproduce:

This seems to be due to the fact that the appmenu title-bar button has been disabled in Tails since 133e6bf1 (which was a fix for #11270 (closed)). Indeed, the default value for the /org/gnome/desktop/wm/preferences/button-layout setting is 'appmenu:close', according to the corresponding GSettings schema, but, in order to add the “minimize” and “maximize” title-bar buttons, 133e6bf1 set this setting to ':minimize,maximize,close', which thus disabled the appmenu button.

This went unnoticed until then, as Tails still used the Xorg backend (which made the application menu appear as the extra “Application” menu in the menu bar). However, with the switch to Wayland, a few GTK3 applications are now missing their application menu. As far as I could find, this doesn't concern officially Tails-supported applications, but it still impacts other applications which can be installed through the official Debian repositories (such as Gobby, for instance).

From what I could test, it seems that setting /org/gnome/desktop/wm/preferences/button-layout to 'appmenu:minimize,maximize,close' (using either dconf or gsettings) fixes the problem and restores the application menu button in the title bar. Furthermore, I could check on an up-to-date, freshly installed Debian 11 that using gnome-tweaks to enable the “minimize” and “maximize” title-bar buttons would set this setting to the same value.

I'll try and submit a simple fix along these lines.

Thank you very much!